Now is about the time you’d probably expect me to make a pun about how “genius” the Genius Pipe is. Well… You’re right. It’s Genius.

Originating in Highland Heights, Ohio, The Genius Pipe was created with the goal of providing the user with a guaranteed cough-free hit from a pipe. How does a company ensure something like that? Well, The Genius Pipe utilizes 2,000 tiny dimples in the chamber of the device to cool the smoke as it passes over them. This “dimple technology”, developed and patented by NASA decades ago, is a groundbreaking innovation in the cannabis consumer product industry, borrowing from modern science principles refined in other industries. Only to end up being used to smoke pot…

A Discrete Pipe for the Sophisticated Smoker

Aesthetically, this pipe really is impressive. Made from a durable aircraft-grade aluminum, the Genius Pipe looks like some sort of new aircraft technology, especially when you open it up. The pipe is comprised of three pieces- The top and bottom of the pipe itself, and a sliding plate that covers the bowl. The top and bottom of the pipe are held together by magnets, allowing for incredibly easy breakdown and cleaning. Just let the pieces soak in a little bit of rubbing alcohol and they will be good as new! The Genius Pipe also comes in various colorways and designs, making for a futuristic and stylish piece of smoking equipment.

This is where the Genius Pipe truly shows it’s smarts. Makers of The Genius Pipe claim a guaranteed cough-free hit and the coolest pipe hit possible, so this is where the “dimple technology” that we discussed earlier is put to the test. The 2,000 dimples definitely make a difference as they cool the smoke down from combustion to room temperature by the time it reaches your mouth, and for that, I give the Genius Pipe kudos. No one wants a harsh bowl rip. The dimples also serve the purpose of catching tars and resins as they pass through the pipe that you would otherwise end up inhaling. In my opinion, this is one of the coolest pipes that I’ve smoked, temperature-wise. 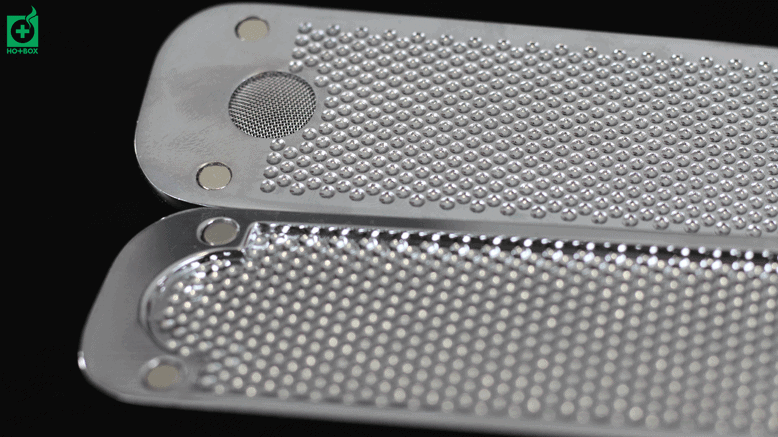 Is This the Best Pipe Out There?

It is the coolest pipe, but is it the best? Now sold in 23 countries and gaining more clout every day, the Genius Pipe has been praised for its innovative technology, stylish appearance, and virtual indestructibility. It has also been touted as somewhat of a “luxury” pipe. Retailing at around $90, the Genius Pipe isn’t for everyone. In other words, if you can easily swing it, I’d pick one up and give it a try. If not, I wouldn’t worry about it. You’re not missing all that much.

Check out our HotBoxTV Video review. Don’t forget to subscribe to our channel!!