An Inside Look: The High Life Game

Here is a very rare treat for my stoners AND my non smokers! Introducing to you The High Life Game, but before I go into the actual game itself, I’d really like to give you a little background on the masterminds behind it. I had the honor of spending some real quality time with Mark and Amanda (The Owners) and really got to pick their brain about the game, and I have to say I was totally blown away. This game is based so much on love, good karma and building each other up no matter what gets thrown at them instead of the typical game situation where players are pitted against each other to win, this game calls for working together and helping your fellow peers. Mark and Amanda have such a vision birthed out of love, and they have very much succeeded in making their dreams come true.

Now lets get to the game right? The High Life Game is everything you could ask for in a game it is a dice/card game that can be played with up to 5 players, which makes this a totally awesome party game but it works for any ordinary game night. Its starts by everyone picking their Player Token(which is a seed card that you have to mature before you can get Bud Tokens) then we roll the dice to find our smoke number, any time that number is rolled you get to smoke 🙂 and if you don’t smoke then you can just make up your own rule for when your number is rolled.Then the game begins and that’s the fun part, but just to give you an example, when I was playing the game with Mark and Amanda at one point in the game I had 14 ft high plants and drew the Harshed our Groove: DEA card! That was supposed to have cleared out all my plants and bud tokens, thankfully my husband had a Karma vs Karma : Good Lawyer Card that negated the effects of the DEA  and allowed me to keep my crop, and that’s what I was talking about earlier. This game really allows you to have a nice fun, smoke filled evening enjoying the time spent with those who are playing instead of arguing over who did what to who.

The objective of the game however is to have all pots in your grow room filled with a plant, and to have bud tokens on all of your plants to win. Now I hope you didn’t think I would  use these terms and not tell you what they are right? Bud tokens are a very important part of the game and they can be whatever you desire. When I played the game with Mark and Amanda we used poker chips and/or dice but you can use coins, bits of paper, anything really, that you have an abundance of so you don’t run short in the game. Now. Bud Tokens represent the amount of buds you have on your plants and also count as a foot in length to add to the plants original height. So say I have a 4 ft plant on pot 3 and I receive a Bud Token and place it on pot 3, I now have a 5ft plant.  There are a few categories of cards and they are as follows: Player Tokens, Good Karma, Karma Plant, Harshed our Groove, Seeds, Plants, Karma vs Karma, Equipment, 420 Somewhere, 710 Somewhere, and lastly but certainly not least, the Male seed .

The beauty of this game is that it can also be considered an educational game because the whole game is based on real growing facts!

Take for instance one of the Equipment Cards, The PH Meter card reads: Water and Nutrients can be too acidic or alkaline, so you must test to make sure the PH level is between 6 & 7. Roll 2D8(Two 8 sided dice included). If the total equals 6 or 7 gain 2 Bud Tokens. Do this once per turn as long as this card is in play. If you aren’t a grower chances are you’re not going to know that, and there are plenty others such as the Nutrient Test, the Grow Lights and more. I knew most of this already which is why I brought my husband along, he doesn’t smoke but he really grasped the concept of the game fairly quick and mentioned to me at the end of the night that he learned some fun weed trivia from the game and had a great time doing so. Which makes it all the more worth the buy! 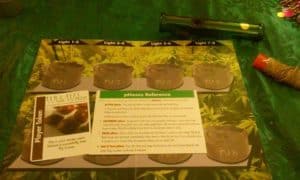 I absolutely enjoyed the game, I feel as if it would make a great addition to EVERY stoners home and really put people in the right mood to enjoy each others company. There are other fun aspects of the game such as rolling for bud tokens or maturing special seeds from Amsterdam, but there are some trouble makers in the cards as well such as spider mites and critters but for every bad card in the life pile there is a karma vs karma card to negate the effects, making The High Life Game the Ultimate weed game to play among friends and loved ones. I know its my go to choice!

You can receive your very own High Life Game by visiting them on their Website! So go get one, share the love and grow some weed!  And dont forget to keep up with them on Instagram!

I saved the very best for last, this is a grow game and all of the cards have Mark and Amandas personalized pictures on the cards, but if you were to have your own pictures that you want to use and personalize it to your group of friends, customized orders are welcomed with open arms! They will take good care of you , that I have no doubt! I look forward to seeing more of The High Life Game don’t you? As the High Life Game Team says “GROW HIGH AND PROSPER!”

That’s all for now everyone!

Stay Blazed and High Life On!